Here is a list of commonly used terms to describe angles formed by two parallel lines that are cut by a transversal. 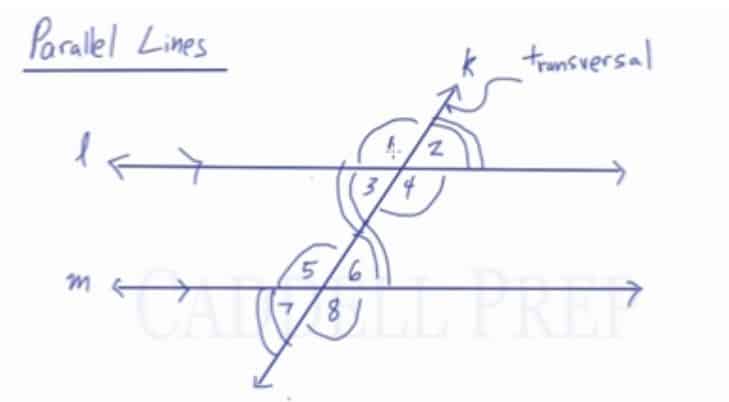 In this lesson, we’ll go over angle relationships resulting from two parallel lines cut by a transversal.

which are parallel to each other.

We also have line

which is the transversal.

When a transversal intersects two parallel lines, there are a lot of angle relationships that result.

First, if we ignore the bottom line and focus on the top line

, there are already a lot of angles.

Now if we focus on the bottom line

Look at the drawing.

are corresponding angles so they are congruent. Meaning they have the same exact measurement.

Therefore, we can say that

is on the top right as well as angle

Now, let’s look at the angle

, which is at the bottom left same as angle

. So, we can say that these two are congruent.

. Which makes them congruent with each other.

Corresponding angles are angles that match up on the diagram. Top-left to top-left. Top-right to top-right. And so on.

Let’s go over some more terminologies.

Angles in between the two parallel lines are called interior angles.

Those that are outside of this are known as exterior angles.

If we go from one side of the transversal to the other, that’s called an alternate.

Angles on one side of the transversal are called same-side.

Alternate means the different side of the transversal. While interior means in between the parallel lines.

So, alternate interior angles are

. These angles are also congruent.

are also alternate interior angles. This means they are also congruent.

Exterior means outside and alternate means opposite sides of the transversal.

Now, let’s look at the diagram as a whole.

If you think about it, we’re just jumping back and forth like zigzagging through the diagram.

Angles you jumped into are congruent.

This is the best way to identify congruent angles.

If two angles are not congruent, then they must be supplementary.