In this video, we are going to look at arc and chord relationships.

Chord: A straight line with both endpoints on the circle.
Arc: Part of a circle’s circumference.

are parallel to each other, then the two arcs between are congruent.
If chord

are the same length, then the two arcs they intercept are congruent. 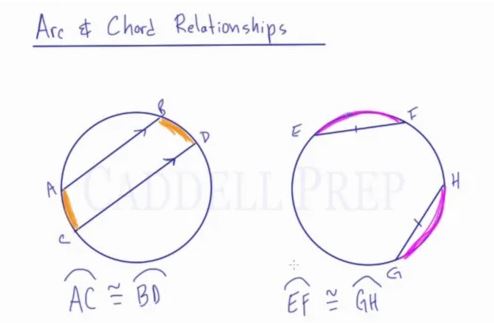 In this lesson, we’ll go over arc and chord relationships.

We have a circle here and we have a chord

The arc in between

Now, in the other circle, we have chord

These are not paralleled to each other but these chords are of the same length.

If you have two chords of the same length, regardless of where they’re drawn inside the circle. the arcs that they intercept are going to be congruent to each other.

The vice versa is also true if we were to know that the arcs are congruent.

then we know that the two chords are parallel.