Let’s first learn what these postulates are:

Substitution Postulate: A quantity may be substituted for its equal in any expression.
For example:

Since the sum of 3 and 8 are both 8, we can substitute each expression with 8 and they will still equal to one another.

Let’s look at the diagram given in the video:

We are given the information that

and we have to prove that

Mark the congruent lines on the diagram and then write it in a statement-reason proof.

aren’t sides of the triangles but rather part of the side length. The entire sides are actually

Both overlap the line segment

because of the reflective property.

Let’s look at the diagram again. Since we already know that

because of the substitution postulate. Now, we have the two side lengths congruent to each other.

Applying the subtraction postulate into a proof, let’s look at another example: 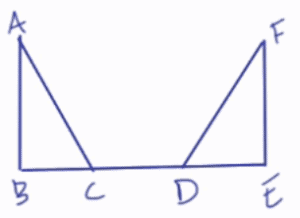 We are given the information

are more than sides of the triangles. However, we can subtract

from each congruent lines segments.

But first, we need to state that

because of the reflective property. Then, we can say that

Use the substitution postulate to replace

. Now, we have the sides lengths congruent to each other.