This can cause a lot of problems to a lot of students.

For example, we have this triangle. And we have something like this. And points A, B, C, D, and E.

We want to prove that

This is pretty difficult to see. So, let’s write them using different colors.

One of the steps in proving that these triangles are congruent is we have to find out if certain side and certain angle match up when we’re given certain information. But since we have overlapping triangles, there’s information given in the diagram. That is not given to you as a statement. And we could see it because certain things are congruent because they exist in both of these triangles.

It will make a lot more sense when I show you.

If we look at

, we have an angle

Because this angle is the same angle in both triangles, it’s congruent to itself.

and this angle are the same in both of them.

So, we know that the measure of

. Because it is itself.

We know that because of the reflexive property.

Here, the main point is that you have information on congruence based on the diagram.

Here we have a diagram. I want to prove that

is this triangle and

is the other triangle.

Examining this, we should see that they share this side –

. That is by the reflexive property. 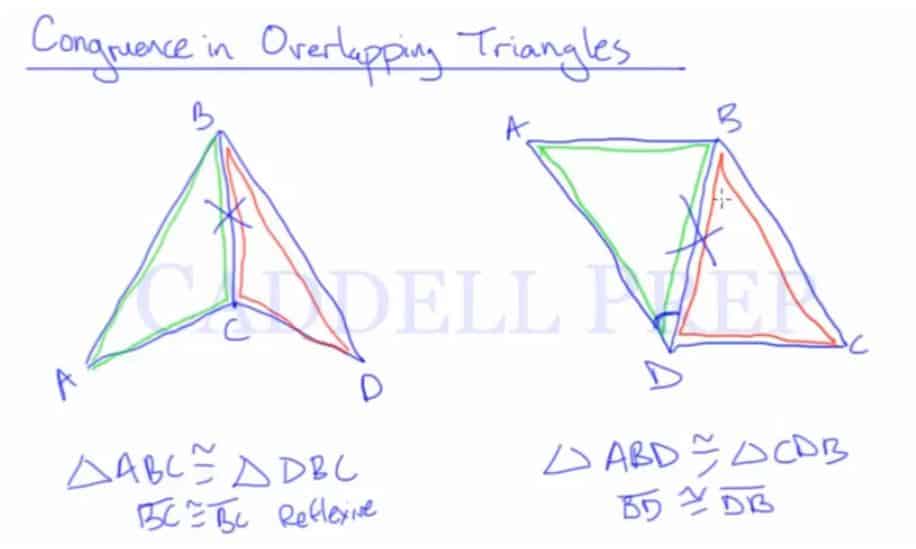 That is the given information just by looking at the diagram. We have one side is congruent to the other side.

Yes, they both have an angle

. But one angle is separate from the other angle. Just because both are called

doesn’t mean that they are congruent to each other.

is in both of them. They have both side

and it’s the same exact side. This is how we can use the reflexive property.

Now, let’s take a look at this one.

. I want to prove that these two are congruent.

This way, everything is aligned correctly. Because

in one triangle will eventually match up with

in the other triangle. Just by looking at how it’s arranged.

is second and then

in one triangle will eventually be proven congruent with

in the other triangle. Because they are last.

So, when we name the side, we should name it that they correspond.

But the main point is this side is congruent to itself. Again, we’re given a side based on a diagram.

This is a little bit more advanced. But we can use the reflexive property here also.

Here, we’re trying to prove that

. Let’s say we were given another piece of information.

This part is congruent to the other part. These line segments are congruent. But these aren’t a side of a triangle. It’s just part of a side. So, we don’t have a side is congruent to a side at this point.

But if we look at

, it’s a part of the entire side

is part of the entire side

We don’t have a full side is congruent to a full side of a triangle. But we definitely have a part of a side of the triangle.

If you look at what’s missing from this triangle, you’ll see that

If you look at the other triangle, you’ll see that

. Then it’s congruent to itself.

In the future, we’ll learn about the addition postulate and substitution. But conceptually, we can make sense of it now.

, then we would know that

is the same length as

I’ll demonstrate it with numbers.

inches. Then we know that the length of

inches and the length of

So, we know that

is going to be the same as

So, it’s going to add up to be the same. The total of

is always going to be the same as

This is just something to look out for overlapping triangles.